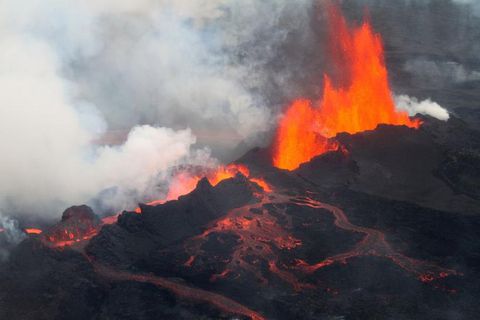 Iceland is likely to do justice to its name again: a volcanic eruption is imminent at the so-called “Land of Fire and Ice”. Home of the biggest glaciers in Europe and thousands of active volcanoes, the island is well used to seismic activity and spectacular eruptions. In recent times, tongue-twister Eyjafjallajökull stole the show and stopped major air traffic in Europe and North America during its 2010 subglacial eruption.
In 2014, Bárðarbunga erupted for several months in a row, causing no damage but a spectacular lava flow.
Our unique country is located on top of the mid-Atlantic ridge, where the Eurasian and North American tectonic plates meet – or rather come apart, as the distance between the plates is increasing by about 1cm/year. No surprise then that from time to time the earth starts shaking, especially in the proximity of the rift. Still, the past few days have seen exceptional seismic unrest – just kilometres away (38km to be precise) from the Capital, Reykjavík.

In the morning of February, Wednesday 24th, two major earthquakes (M5.7 and 5.0) literally shook all residents of South-West Iceland, and the unrest has been constant since then. At the time of this writing, tens of thousands of earthquakes have been measured since the first shakes, and, in the past 48 hours only, 70 over M3.
Infrastructures and buildings are designed and built to withstand such natural occurrences so that the local population can safely continue attending to their daily activity even on the occasion of intense seismic activity. Virtually no damage to property has been recorded during the past eight days, beside items shifting on shelves and accidental coffee spilling on a clean shirt.
Still, seismic activity can be quite unsettling, especially during a prolonged swarm, and it sometimes feels like the earth does not stop shaking for hours. Fun times!

The ongoing unrest is originated 2km south-west of mount Keilir on Reykjanes peninsula, the large volcanic stripe of land mostly known to travellers to Iceland for hosting our only International Airport (KEF) and Blue Lagoon, one of the modern wonders of the world.
As the peninsula sits on top of the mid-Atlantic ridge, earthquakes and eruptions have been a constant over thousands of years here, but no eruption has been recorded for centuries.
Until now.

Erupting or not eruption?

That‘s right, an eruption might literally happen any minute now.

As of yesterday, March 3rd, we are in a state of alert as an effusive (lava producing) eruption is believed to be imminent.
The hypothesis of an eruptive event had been originally ruled out as highly improbable, but more recent satellite-based monitoring data and sensors have shown possible magma intrusions in the ground close to Fagradalsfjall – a short distance from pyramid-shaped Keilir, and a sharp increase in seismic tremor (many small, overlapping quakes in one specific area) was recorded – both symptoms of volcanic unrest which have been observed ahead of previous eruptions in Iceland.
The pulse of instability has since last afternoon‘s recordings reduced in intensity although the earthquake swarm continues unabated, with the area around Keilir now closed to all traffic and the risk of an eruption very high.

Would an eruption occur in the area, it likely won‘t threaten inhabited areas and mostly consist of a slow lava flow and little to no ashfall.
Residents of Reykjanes peninsula and the Reykjavík metropolitan area are following the news with interest, and all eyes are pointed on Keilir and nearby Litli Hrútur, a small mountain whose name translates into impossibly cute “little ram“, and currently seems to be the epicentre of the unrest. It is believed that the eruption would take place in the lava field of – wait for it – Þráinsskjaldarhraun (Þráinn’s shield lava field). And you thought Eyjafjallajökull was hard to pronounce? Here is a pronunciation tutorial for you, good luck with all those weird sounds!

Escaping or staying calm – how do Icelanders react to the possible outbreak?

Icelanders are renowned for their laid back, stress-free attitude (brilliantly summed up in our national motto: þetta reddast, or, for the non-Icelandic speakers, “everything is going to be alright“), and the current events are no exception. Curiosity and anticipation are mostly felt among the population at this stage, and many hope that an eruption will cause for the earthquake swarm that has been shaking the region for over a week to finally cease.

Let‘s admit it: after an extremely tough 2020, 2021 already seems to have in store some surprises. A volcano might not be exactly what we need right now, but a slow lava flow (experts believe that such an eruption might last several days or weeks) in an uninhabited area might be a great show to watch from a safe distance.

Northern lights photographers and enthusiasts alike have one more reason to be hopeful: March is statistically one of the best, most active times of the year for experiencing an Aurora Borealis, and watching the sky dance over a river of lava is truly a once in a lifetime experience.
We cannot stress enough that safety must be everyone‘s priority here. The geography of Reykjanes, with its iconic peaks and lava fields visible from a great distance, will make it possible to see the lava flow without having to get close to the affected area (which is currently restricted to all civilian traffic, and will be until further notice) nor in the way of scientists and authorities, would an eruption occur.
As an alternative, you can check out the live stream of the area set up by Morgunblaðið on this page.

Further information on seismic activity in Iceland can be found here.