Do Auroras Occur on Other Planets?

As Iceland sits in a sweet spot within the Aurora belt, travellers frequently get the pleasure of witnessing one of nature’s greatest phenomenons when visiting our shores during the winter season (September – April).

However, as with all great things, the Northern Lights are not always guaranteed. The intensity varies, there are activity peaks and troughs, and quite wonderfully, each show is never the same.

But, why is it that we are lucky enough to see such a sight on Earth, and why does it occur at the poles? And, do any other planets experience the same auroral displays we’re able to witness?

In this article, I’ll make sure to cover the following:

What Makes the Northern Lights Appear on Earth?

There are numerous beautiful stories of folklore about what makes the Northern Lights appear. From the Finnish tales of an Arctic Fox running across the Arctic skies, to the reflecting armour of the Norse mythological Valkyrie warriors preparing for battle, as well as the more sentimental dances of our ancestors above.

In the past, folklore has led to countless interpretations and meanings behind this wonderful phenomena. But in the last 150 years, our scientific understanding of what causes both the Aurora Borealis and Aurora Australis on Earth has advanced dramatically.

It all starts at the Sun’s atmosphere, which is known as the Corona (nothing to do with the virus or the beer!).

The temperature of the Corona is at roughly 1 million degrees Celsius, making it a plasma filled with a large number of electrically charged particles.

These particles move very quickly, so quickly that they regularly break away from the Sun and stream away in what’s known as the solar wind.

This solar wind then travels at several hundred kilometres per second, which, when it’s facing in the Earth’s direction, can cause it to hit the Earth with a great amount of the Sun’s solar energy.

The Earth, however, has a natural magnetic field which protects us from the bulk of the Sun’s electrically charged particles.

This magnetic field covers the entire planet because the Earth’s outer core is made of a huge mass of molten iron. The convection currents cause the molten iron to rise, and the Earth’s constant rotation causes it to spiral around.

As iron is an electrically conducting substance, this circular flow creates what is known as a dynamo, which creates a magnetic field around our planet shielding us from the Sun’s cosmic rays.

Once the magnetic field is sufficiently stretched out, it snaps back, accelerating all of the electrically charged particles like a slingshot towards the Earth up and down the field lines at the Earth’s poles.

The Sun’s particles then hit molecules of Oxygen and Nitrogen in our atmosphere which excites these molecules and emits the energy in the colours we’re able to see in places like Iceland.

Because of its impact on the poles, the aurora can also be seen in a great many other lucky locations such as the Nordic countries and Canada in the northern hemisphere, and parts of Antarctica (as well as parts of New Zealand and Australia occasionally) in the southern hemisphere. 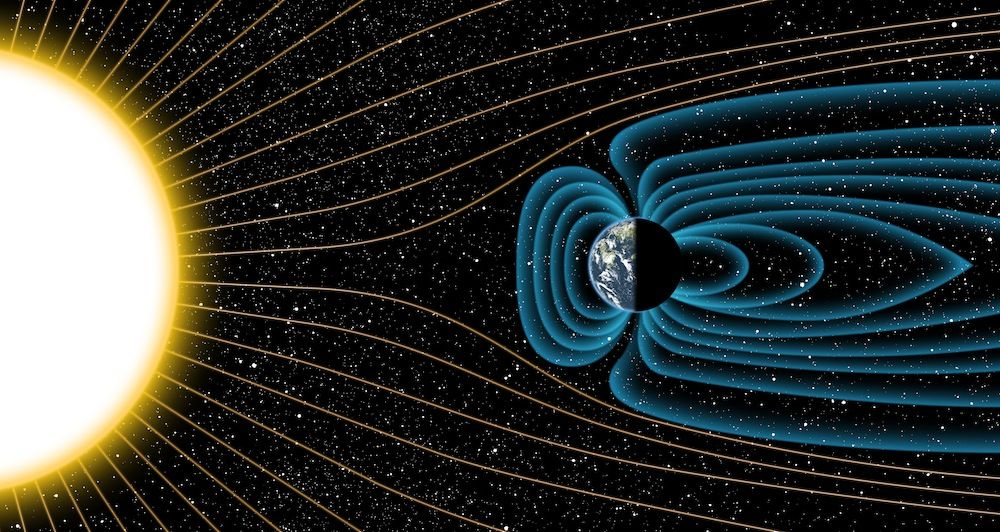 Can Auroras Occur on Other Planets?

The short answer is yes they can, and they do.

Essentially, the same logic stands for why we can see the aurora on Earth. However, the major differences lie in a variety of strands that astronomers and scientists are still discovering to this day, such as size, position and atmospheric conditions.

As mentioned above, if the Earth didn’t have an electrically conducting molten iron outer core then not only would we not have a magnetic field to protect us, but we wouldn’t have any Northern or Southern Lights to watch, and life would also not be able to exist.

Not only is Icelandic tourism reliant on this spectacular phenomenon, but without a magnetic field, we would simply have no protection from the Sun’s dangerous cosmic rays. This is why scientists have the assumption that for auroras to occur on other planets in any form, they would at least need to have a magnetic field.

However, just to throw a spanner in the works, scientists have managed to uncover a new type of aurora which can occur on planets without a magnetic field.

Mars is a perfect example of this. 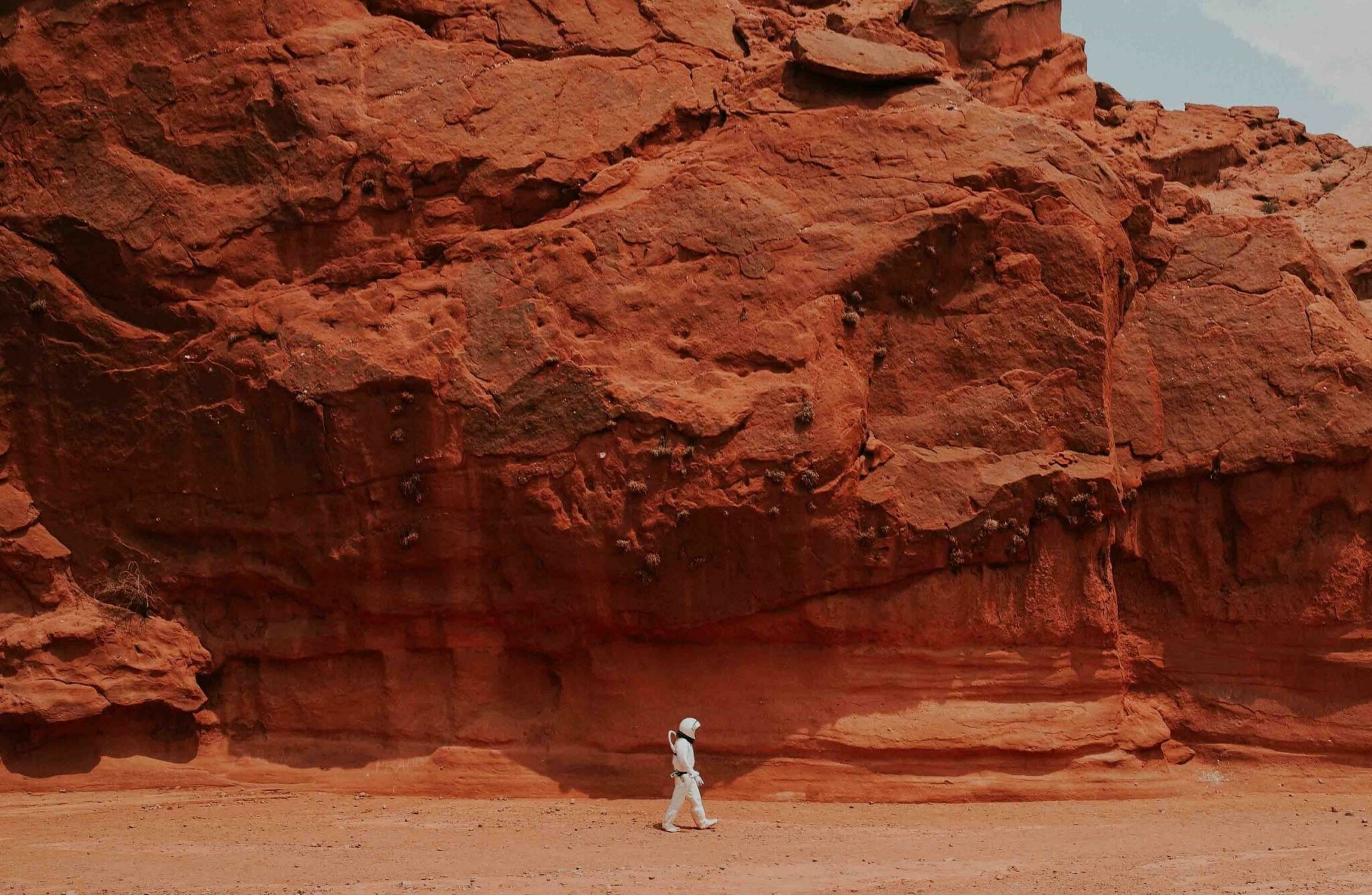 Photo by Nicolas Lobos on Unsplash

Bizarrely, this newly discovered type of Aurora occurs on the day-side of the planet (the side that faces the sun). It happens when the sun’s energetic particles plunge into the planet’s atmosphere, bombarding oxygen atoms and making them glow, even though Mars has long lost its magnetic field.

Even recently this unusual type of aurora occurring on Mars was photographed by a joint European-Russian satellite (Trace Gas Orbiter), shown as a strange green glow.

This has widely become known as the Martian Aurora and acts quite differently from the aurora we observe both on Earth and other planets. Plus, if you were lucky enough to be standing on the surface of Mars, you would need incredible vision to see this strange reaction in broad daylight.

Which Other Planets Experience Auroras?

Aside from Mars, all of the other planets which also experience an aurora (both Northern Lights and Southern Lights) are those with active magnetic fields. And, because they have magnetic fields, their Auroras, like Earth, are majorly active on their poles.

The planets that we know experience Auroras in our solar system are the gas giants: Jupiter, Saturn, Uranus and Neptune. However, they are very different from what we experience here on Earth.

Scientists have known that Jupiter has an Aurora since they took some images from the Hubble telescope in 2016.

This wasn’t a big surprise as Jupiter was suspected of having the most powerful and largest magnetic field amongst all the planets in our solar system.

However, what makes Jupiter’s aurora different comes in 3 forms:

First, we would not be able to witness Jupiter’s Auroras with the human eye. This is because it is only visible in either x-rays or ultraviolet light wavelengths which our eyes can’t detect.

Second, though Jupiter’s auroras occur at each pole like on Earth, they have a very different activity on each. Whereas, on Earth, both the Northern and Southern Lights are more or less mirroring each other in terms of activity.

Finally, though Jupiter’s Aurora activity is often over 100 times more powerful than what we experience on Earth, the reaction to create the phenomenon is bizarrely different.

After the Juno mission, scientists believe that instead of the particles getting a boost by the Sun’s plasma to reach a specific energy level (like on Earth), Jupiter’s particles are instead gradually accelerated to a wider range of energies by interacting with the waves of plasma released by the Sun. This then results in some particles emitting varying levels of energy, some high and some low, regardless of the intensity of the Sun’s activity.

Essentially, if you think predicting the Northern Lights on Earth is tough, Jupiter is near impossible.

Saturn is far easier to understand than Jupiter.

Much like the aurora we experience here on Earth, Saturn too has the same curtain-like auroras that delight so many people every winter in Iceland.

However, there is one significant difference.

This also means that Saturn’s strongest auroras occur in the ultraviolet and infrared wavelengths, which again would mean we wouldn’t be able to see it with the human eye.

There is a simple explanation for this, however. Instead of the Sun’s plasma filled with electrically charged particles interacting with nitrogen and oxygen particles and molecules like on Earth, on Saturn, they interact with hydrogen.

Initially, astronomers proved auroras existed on Uranus in 1986 as a result of NASA’s Voyager 2 probe, with later images to confirm taken from the Hubble telescope.

Unlike Saturn and Jupiter, there are very minimal differences between the aurora we experience on Earth compared to what occurs on Uranus that we know of so far.

The major difference is the size. Uranus experiences mirroring Aurora activity on each of its poles, each roughly the size of Earth itself. The size difference is similar to that of Jupiter and Saturn also.

The only other noticeable difference is that Uranus’s magnetic axis is 60 degrees different to its spin access, positioning the Auroras at some odd angles on inspection. This is different from all of the other planets in our solar system, which are generally much more aligned.

However, with the planet being named after the Greek mythological titan and primordial god of the sky, Ouranos, it had to be a little different!

Again, Neptune’s aurora is very similar to what we experience on Earth.

The main distinction is the impact of Neptune’s rings, which sweep away much of the plasma particles ejected by the Sun.

However, Neptune is greatly understudied in terms of its auroral activity. So, in the coming years, both scientists and astronomers may discover some clearer distinctions between the aurora experienced on Earth vs that of Neptune.

Why Earth’s Aurora is So Special

As you can tell, we’re lucky with the aurora we get to experience on Earth. Not only do we have a magnetic field and planet position that both protects and sustains life, but for the Northern Lights fanatics among us, we also experience some of the most incredibly intense colourful displays which can easily be seen by the human eye.

In Iceland, we’re even more fortunate, by being positioned right in the middle of the Aurora belt. In fact, we might be the best place on the planet from which to watch nature’s greatest show.

The Northern Lights are frequently on everyone’s bucket list, with great stories from those who have had the pleasure of watching a display enticing those who haven’t. 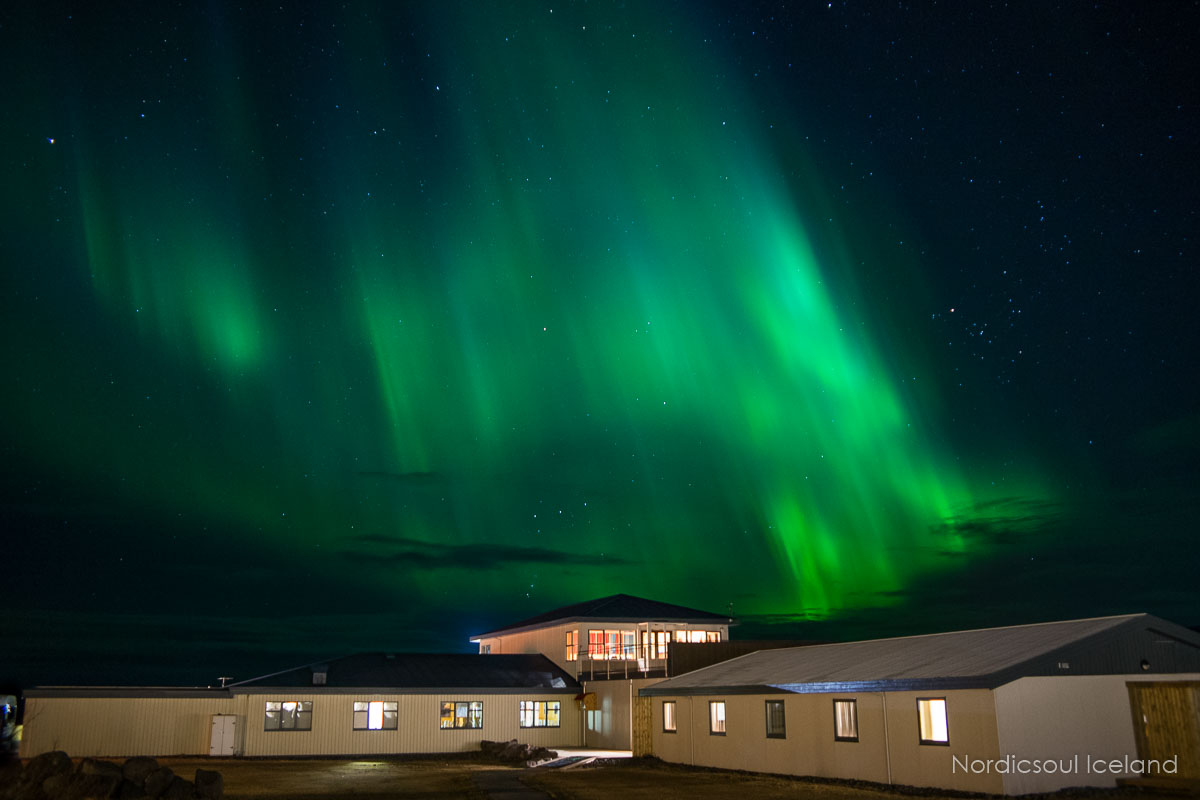 People have passed on these great stories through generations, creating meaning and cultivated culture around this interstellar marvel.

Nowadays, we’re able to provide specific expert local advice of the best places to see the Northern Lights in Iceland. We’re also able to make predictions and hunt the skies during our winter months to capture the dancing ribbons of light that dazzle everyone from the tour guides to travellers, with every show being different to the last.

If you didn’t need one already, this is another great reason to come to Iceland and experience this for yourself. Whether it’s on a Northern Lights tour, a winter package or a self-drive adventure on your own, you’re sure to have a fantastic time hunting the skies in Iceland. 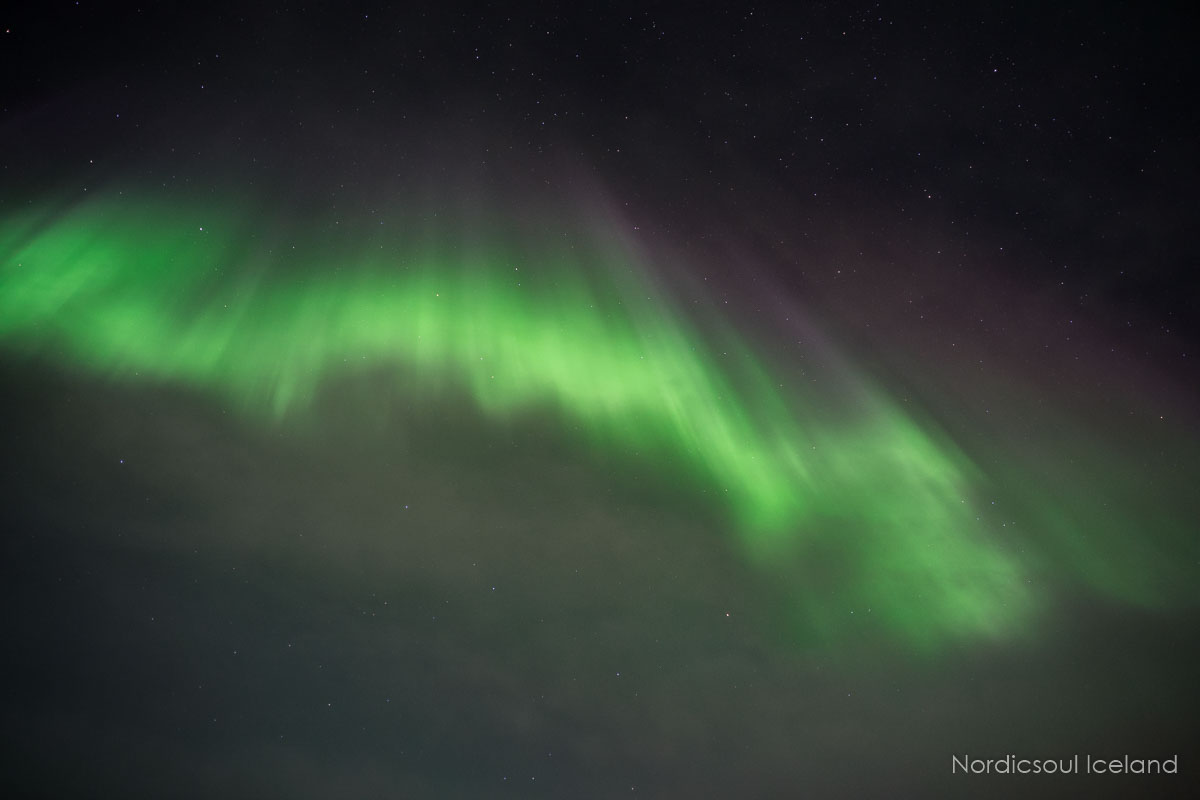 So, do Auroras occur on other planets? Yes, they most certainly do. From the bizarre Martian Aurora to the varying colours, wavelengths, intensity, strength and activity, every planet is different.

However, here in Iceland, we are lucky enough to be positioned in one of the greatest spots to witness this natural splendour on our doorsteps, gardens, balconies and outdoor adventures every winter.

If you have any questions or comments about the Northern Lights in Iceland or on the other planets, please drop us a line below, and we’ll get back to you as soon as possible.